i feel like i'm pretty much just waiting around for ttyki to die. i thought her BG had finally gotten to the normal range last sunday (a week after increasing her to 2U 2x a day), but now i think they were faulty readings. that monitor seems more sensitive to my testing screw ups than i think the vet wants to admit. the subsequent readings put her back in the 400+ category. which isn't good.

she is literally skin and bones. i don't know how she can even move. i can't believe there are any muscles still in there. i've been trying to get glucosamine and chondroitin in her for the stiffness, but i'm feeling like that's too late.

she's hungry all the time and both my cats are completely inept at eating wet food. they basically smash it all to the bottom of the bowl and then ttyki looks at me helplessly. like, every 15 minutes, 24 hours a day. meow. i'm constantly refilling or prying the left overs back up to extend another 45 seconds of eating.

she crawled into the shower yesterday and just peed away. frankly, if she's going to pee somewhere that isn't the box, this is the blue ribbon location to choose. you know what? i prefer peeing in the shower to peeing in the litter box. no muss no fuss no environmental destruction, other than running the water a bit. brian had a keniption, like the whole shower was going to contaminate him. it was like he's never seen our shower, because i can tell you that thing is about as far from contaminate-free as you can get. it's just sitting there waiting on our bank accounts to tear the whole thing straight out of there. so i don't know what all the upset's about. even spraying bleach-based cleaner on it wasn't enough to make him feel clean. not that bleach should make a person feel clean.

i spend the nights on the couch because i don't want to relive her going into hyperglycemia and me being out of commission for eight hours. i can't stand to remember how close a call it was five years ago. very kismet-like, the finding of her. so i wake up constantly to either check on her or to clean up juana's incredibly revolting diarrhea, or to check for more poop because there's no way juana's diarrhea can still be making that smell even though it is, and to feed ttyki some more, and to make sure ozzy is keeping his filthy mits off ttyki and not crushing her to death, i hate him.

almost every time i call the vet (which is at her recommendation), i have to call multiple times over multiple days to get her. sunday, when i got the reading of 90 and worried i shouldn't be giving her a shot, i was told the vet had just left, and for some reason the person answering the phone felt confident enough to tell me to proceed as normal which could have killed the cat, so she went to ask a vet at my behest, but then oh! she caught my vet just on her way out. magically. i don't like having to feel that my vet is avoiding my scheduled calls. she didn't call back yesterday and i just give up. maybe i'll adjust meds myself. but at what point do we decide she just isn't responding to this insulin?

we just keep sticking her with needles. and it's hard to do injections when there's not much there to inject into.

i'm afraid to recycle all the cardboard boxes. i know which towel to wrap her in and which toy to put in with her. and then i'll come home with a ttyki-shaped hole in my life.

i wonder if cats look at us and wonder how it is that we age so slowly.

so brian continued to be off from work last friday and we just all ran around like chickens with our heads cut off because this is how we behave when it's going out of town day, which it was. and at some point, i just wanted to throw my hands up in the air and say this isn't worth it... we're not leaving town again until the children are both in elementary school and the entire world becomes vegan and gluten free and we don't have to travel with food like we're gypsies or bands of people who travel around with food.

and then it was all done and we hopped happily in the car and then i took ttyki in to be boarded and it was the first time ever that i've boarded a cat and these days, i just figure the stress will kill her and i had my head thinking about that time she ended up at the other vet's several years ago, one of those times where the vet wanted me to think ttyki was just going to explode her intestines and die on the spot, and i went to visit ttyki and she just wanted to come out so freaking bad and i had to leave her there, and that's what i was remembering as an antidote to lying to myself in an attempt to pretend she totally wouldn't mind her stay in cage-town and then i leaked tears in the car traveling to oliver's school.

i went in to get him and he was sitting on his tiny chair at his tiny table with cherry tomatoes and bread crusts all over his plate and i got to watch him pack up his left overs and clear his place and wash his dishes and put his chair on top of his table... all the things he never does here (okay, he once put his chair on his table, but i wasn't too keen on that). and dawson was grabbing at my hand and pocket in a way that made me think one of my children was on my right side, but there was this little red-headed boy instead and he was very curious where oliver was going ("to see jason and the bison") and if we were driving or flying and when would oliver come back. and nicholas popped up out of nowhere and said, "I HAD JASON'S JELLY!" and i thought somehow our jason was figuring into this and had no idea and so said, "OH! JASON'S JELLLY! WELL ALRIGHT!" and then i remembered how the children order from jason's deli sometimes and amended my statement and beselot said, "JASON'S DELI! NOT JASON'S JELLY! HAHAHA!"

and we got the hell out of there and went to pee in the parish hall. parrish. whatever. i've already spent too much time on this entry and we aren't even on a highway yet. we peed in the bathroom. not the hall proper. but wouldn't that be snickeredylicious if we had peed in the hall proper?

we tried to haul ass on out of town, but due to the location of medicine park OK in accordance with the location of dallas, we were forced to travel in a northwesterly direction, which we pretty much never do. and brian's directions were from our place and not oliver's school and you have to do this stupid double back thing whenever you want to get from 75 to 35 and we sadly decided not to do that and were ridiculously lost in the incredibly expansive suburbs that plague dallas/ft worth.

brian was about to have some kind of heart attack, but we finally got on our way. there was absolutely no coffee to be found without leaving the highway and there was no way in hell we were going to do that. oliver slept a long time. violet slept a lesser time.

miraculously, we pulled into town (i use the term loosely) at precisely 5:30 and met the owner of Buffalo Gap in one of the few parking lots and followed her on over. to Buffalo Gap. oliver was quite smitten with this name and used it widely for a good 20 hours. he also began collecting sticks compulsively the second we hit the property and it was a struggle convincing him jason didn't need any more sticks for his non-existent fireplace, oh... but he could BUILD a fireplace with these sticks.

it was a cute little 2 bedroom number (kids in their own room!) with a kitchenette. the little freezer door on the tiny fridge would fall to the floor every time you blinked your eyes, but whatever. i ignored it like i ignored the painted cow's skull on the wall. until i would turn and see it over my left shoulder. leering at me from beyond the grave. we phoned jason and he popped over on his way home from bathroom remodeling and watched kids eat number macaroni and chreese on the porch. a porch! with a swing! and two rocking chairs! and a fenced in yard! ...which was kind of scary. 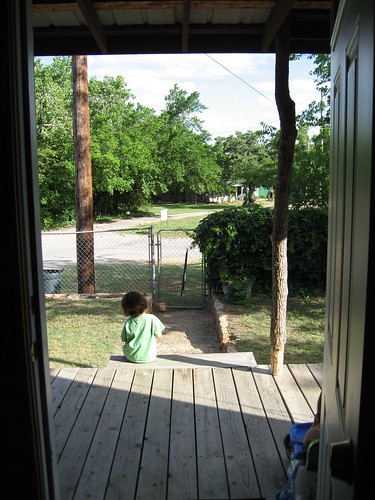 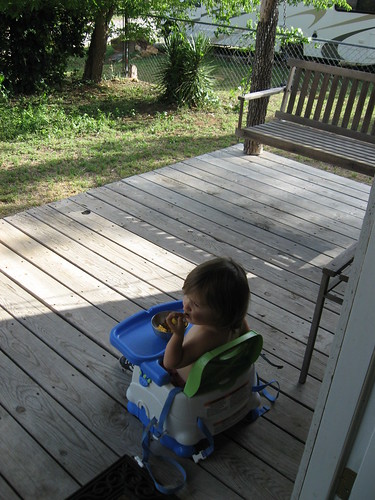 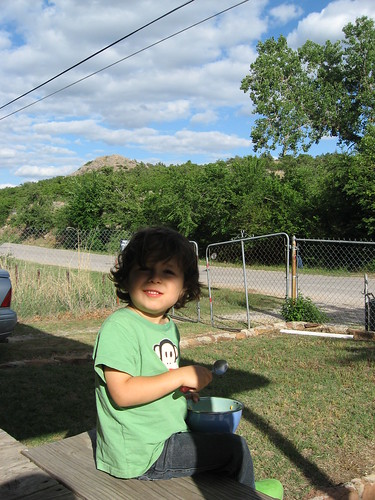 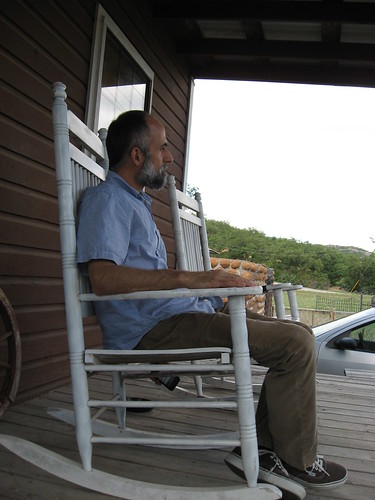 we let jason eat a sandwich before ambling the fifty yards after him to his cottage and he walked us another 70 yards to bath lake for a little scenery. we were besieged by geese and we inspected the bison statue and made fun of the signage by what jason refers to as "the statue of a monkey hugging a mountain." 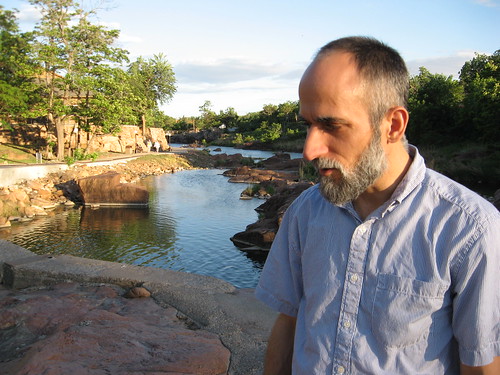 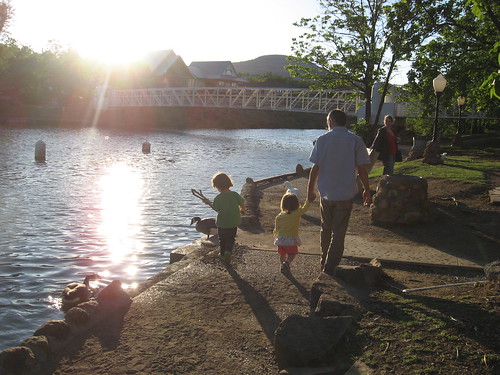 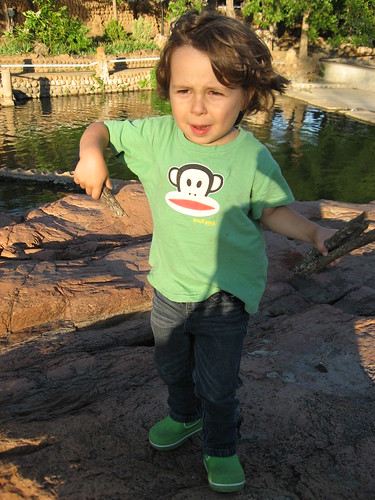 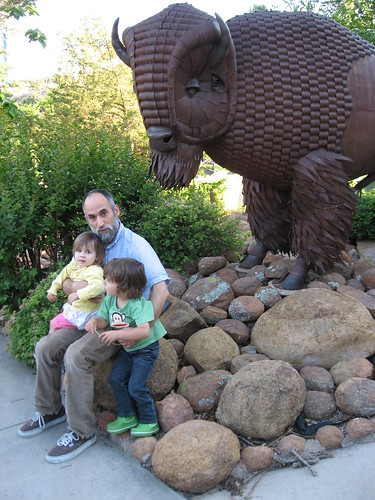 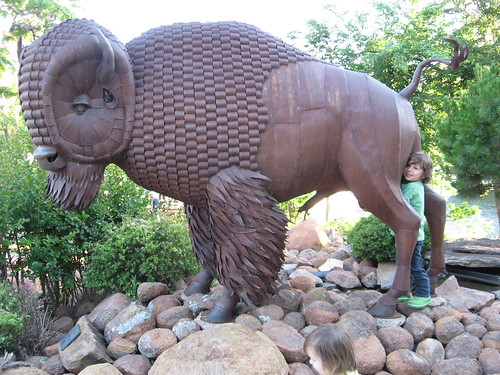 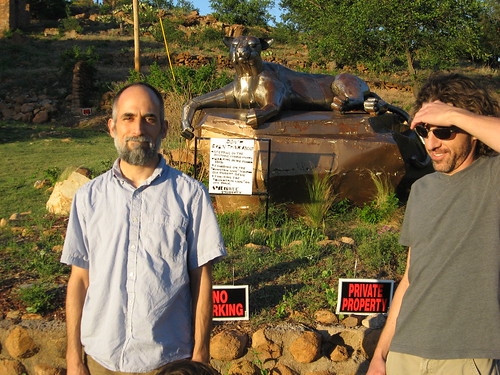 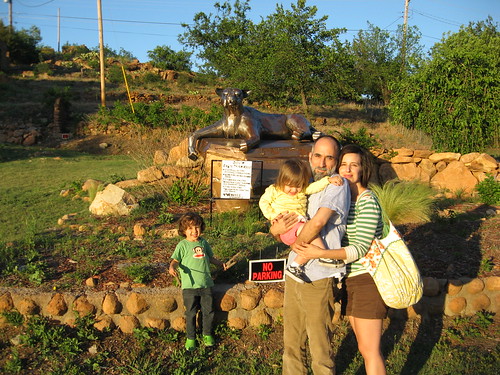 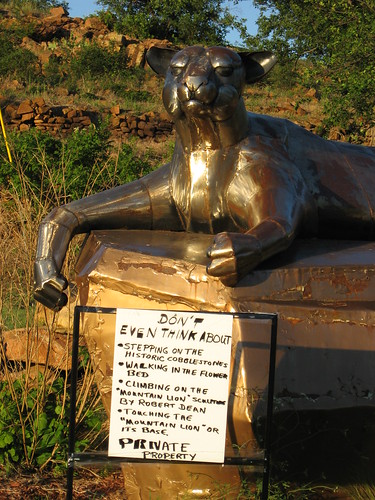 jason is what you might call a renaissance man, dabbling in home building, bee keeping, stained glass making, drawing, upside down tomato growing, welding, sculpting, auto restoring, crocheting, knitting, you just never know what else. i like to ask him what he doesn't do and he likes to answer that he doesn't sing or dance, but i'm his facebook friend and there are pictures of him from school singing and dancing... so i guess that means he does everything. and so let it come as no surprise that jason is also a volunteer fireman, which meant oliver got to pee in the firehouse. in the firehouse's bathroom, that is. and try on a hat and sit in a fire truck. 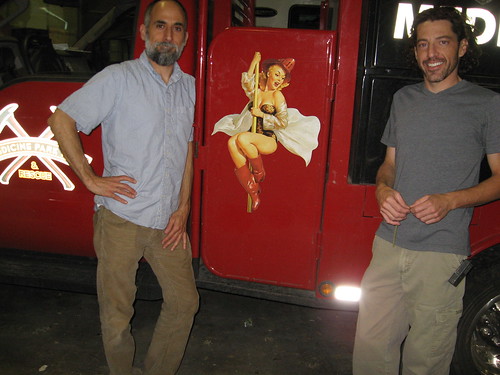 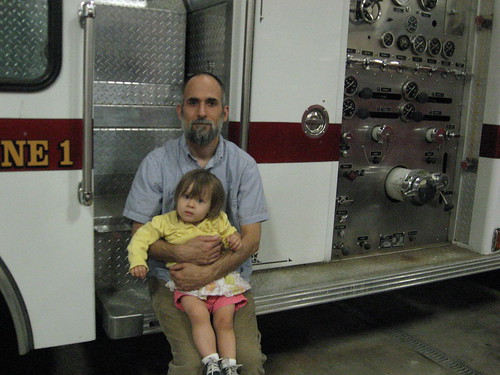 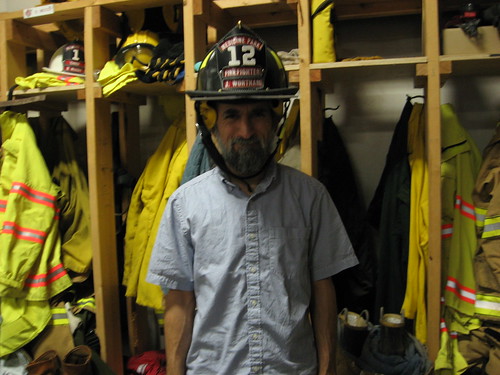 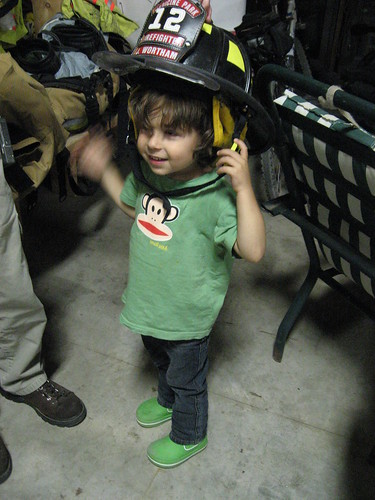 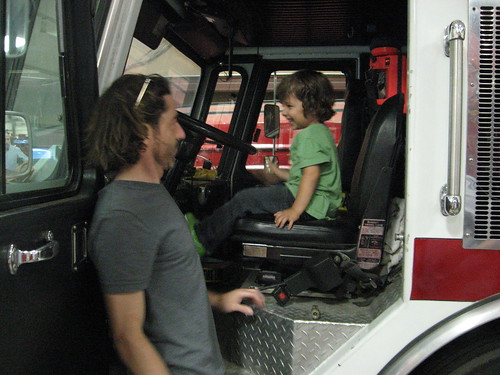 before long, we had to accept the fact it was bedtime for children. he gave me a beer to help (me) and we walked brian into a tiny liquor store for a bottle of wine and then spent one million years watching children pop up and down behind a wall of pillows giggling (separate beds!). they finally passed out and by the time i emerged, jason had already come and gone. brian and i quickly discovered the cable did not work and i had to calm myself with chips and salsa before we passed out in bed.

TO BE CONTINUED, YOU LUCKY DOGS...
Collapse