we were supposed to go to the texas state fair that friday evening, but brian had pulled out his back the night before and was playing hookie from work. this is how i learned they have a basketball court at his new office building up there in the nether regions of the dallas suburbs.

in that case, we only had one last chance to go that sunday. which meant we should leave for tyler friday evening. and we did.

it was my dad's 64th birthday and they were out at the el charro with friends for dinner. after having had el charro with family for lunch. we did not have the energy to join them with our two tiny, fussy people.

saturday morning, we were up and at them so that i could take my car to my mom's office to get the door handle replaced. you see, the exterior driver's side handle decided to split in two one day and i've been having a heckuva time getting into my car without looking like i have a car with a broken door handle. while we were there, we decided to have the tires do a do-si-do to see if that would stop the feeling that my car's about to shake apart on me.

since oliver was back at the house giving grandpa a run for his money, we decided to take violet on our usual luxurious trip to the drug emporium. they'd moved the aisles around, giving us the impression there might be new things to discover. i did discover dr. weil's chocolate oatmeal must have gotten lost in the shuffle.

we returned home and dad told us how they'd walked around the house and then the yard and then the block. if we'd taken much longer, i'm betting we would've seen them walking the loop.

we gathered up oliver and took the four of us to the best pumpkin patch in texas. no one wanted to go with us, so we had to ask a stranger to take our picture. it was not very good, so blame my appearance on her and not on me. it was a super grand time. oliver went nuts climbing up this frigtheningly tall, homemade ladder over and over again next to this little heathen girl who kept pushing into him. i tried to block her at one point and told her to go away and she just pushed into me. so, i bumped her foot with my elbow and made her fall off the fourth rung of the ladder. not really.

oliver would get to the top of the ladder and be about 7 or 8 feet in the air and would make a couple of little victorious hops and i would tense up every fiber of my cardiovascular system and send that energy on up there to keep him from hopping backwards off the platform. then, he'd go to the steepest enclosed spiral slide in east texas and zoom to the bottom. he super enjoyed this.

he had daddy push him in the swing a couple of times and they got enough air that his toes would touch the underside of that platform and send him into a cascade of giggles.

we managed to get him a spot on pappy's barrel train and he steered that old oil drum with all of his might. he rode the hayride down to the pumpkin patch with daddy, while i pushed violet there in her hayride stroller and we swapped on the way back. oliver picked out a smallish pumpkin and several more smaller pumpkins back at the barn. two of them have already had to go to the trash after leaving rings of mold on our dinner table.

it was a gorgeous day and the property is fantastic. people had brought blankets just to hang out on and there was even a birthday party happening at one of the tables. i would like to move to that pumpkin patch and just roll around in the grass.

waiting for the train. 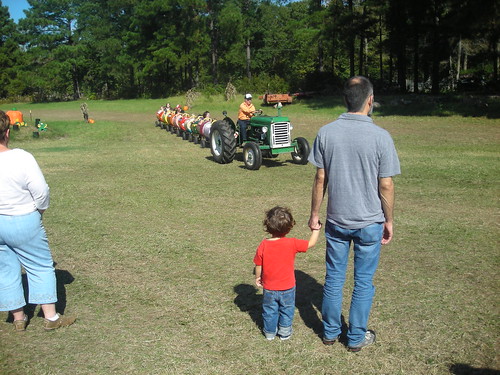 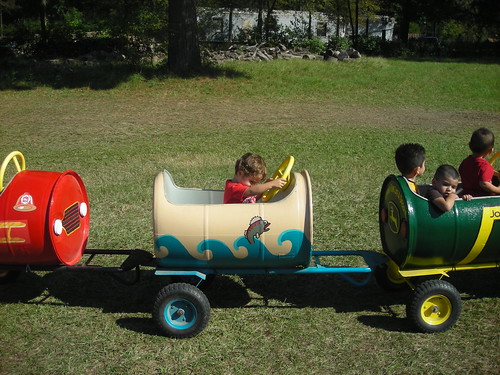 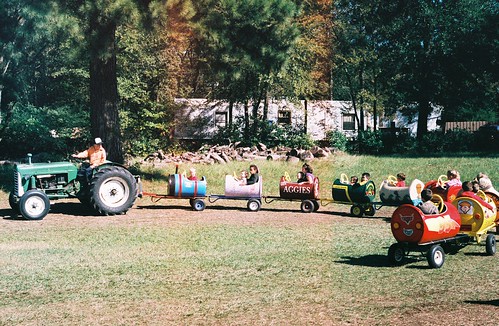 down in the patch. 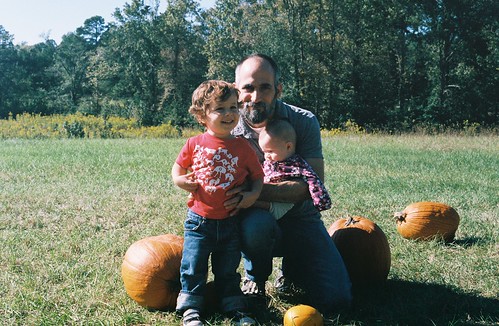 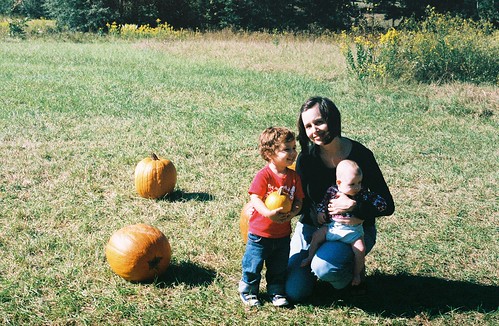 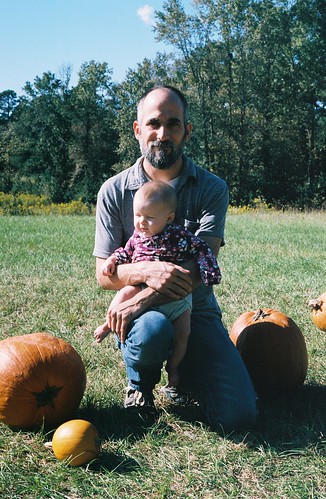 it occurred to me this afternoon that i should probably take oliver to the doctor.

it was totally embarrassing sitting in the waiting room with his hacking cough and bright red eyes. fortunately, i had finally managed to train him this morning to cough into his sleeve and he did this just like a little gentleman.

seeing him sitting on that examination table looking all small and cute in his new, blue, argyle sweater made me feel like he was my tiny boy again. like he was before violet came along. he started crying when dr kennedy tried to find puppies in his ears and she peeked at his throat while he continued to cry. we had to sit for awhile waiting for two nurses to show back up and swab his throat. he sat on the lap of one while the other committed the deed. i felt so shitty. i really hate that whole strep swabbing business.

negative for strep, so it's another adenovirus. i get to use the drops leftover from last march in his eyes.

i drove him to the starbucks to get him a celebratory box of apple juice. he started to tear up when i said the drops were just like putting little raindrops in his eyes. i think it's time for more pain reliever. he's whimpering after coughing again.

i'm so going to come down with all of this. and then, so will violet. inevitable. i can walk around here with my hands in a tub of soapy water hanging from my neck and it will not matter. i can already feel it.

how do people get a single thing done with a toddler and an infant hanging around? how?

i was unsure previously if oliver had been "helping" her and i didn't count rolling over in bed, since that's on a hill and all.
Collapse