we didn't make it to swim night at the gym on friday. i think brian was saying his back hurt and he thought he was getting that adenovirus with pink eye two weeks late. i was considering going on my own until i realized i had already been on monday and going twice in one week would just be pure foolishness.

that was the night i spent 10-15 minutes reclining on the couch on my right side.

saturday morning told me that the third trimester and its pains are officially here. my right side felt all jacked up. it was a pretty retarded punishment for the crime.

i got up early and went to the farmers market for two dozen eggs (1 dozen for easter dying) and a large bottle of honey. i was up so early, i finally went to pick up the cd of my last roll of 35mm, which they had forgotten to include originally, and then into world market hoping to find a dozen non-plastic, fillable easter eggs. i did not find them. i did get two large, cardboard, fillable easter eggs from germany for easter day proper. no clue what should go in them, as i'm not real big on this hunting of eggs for more than the sheer sport of it. i've had too many easters of seeing kids in a tizzy over what's in the eggs... especially when it includes money. an ugly business. i want none of it.

but then, oliver's school has requested everyone bring one dozen filled eggs (suggested fillings include candy and money). susana is kind enough to make sure oliver gets the ones we bring for him, especially since she's already having to do the same for her own celiac-ridden child. i've considered getting a 12 piece puzzle and putting one piece in each egg. we'll see. i realized too late the individually sized raisins i purchased are too large for the standard egg. for easter proper, i might just find a set of non-fillable eggs for him to hunt instead.

also at cost plus, i found a discounted set of wooden chopping fruits, which he'll get for his birthday.

then i took oliver to the little gym by myself and practically gave birth on the rainbow mats because someone had let loose the "hot dogs," which are hexagonally-shaped gym mat roll things that the kids go nuts with. when the kids weren't having melt downs because someone else wanted their particular "hot dog," they were busy trying to roll right over them. so i spent a whole lot of time bending over and trying to keep oliver from breaking his neck. i was working up a sweat. and my belly was doing all kinds of things that just didn't seem right.

we dashed home and got brian for a drive to ikea. first order of business was lunch in the cafe/teria. we haven't eaten there in ages. we purchased organic spaghetti with marinara (large enough for me to share with oliver), an adult-sized macaroni, mixed steamed vegetables, organic applesauce, and two serious desserts, all for... twelve dollars and change. craziness. one of the desserts was the large slab of death by chocolate kind of cake with ganache filling. it was sheer deliciousness until i got to the last bite, which made me want to throw up and never eat death by chocolate cake again. until the next day. and i had forgotten how family-friendly it is there. they even have tiny chairs and tables in a tv area. and bibs. and plastic cups and bowls in an assortment of rainbow-colors, available for sale in the children's department. and a bottle-warmer, for cryin' out loud.

while brian looked for curtains downstairs, i sat and watched oliver go bananas in the children's department. there was another little girl there part of the time who insisted on running ahead of him to get to wherever he was headed first. every time. she climbed into the egg chair on top of him. he eventually got out and giggled and pointed and knocked and said "knock-knock!" everytime she pulled down the cocoon lid. he was very patient in this role and my heart broke a little whenever he would squeak out a sad "my turn" and the little girl, and her parents, would ignore him. i didn't really feel it was my place to ask someone else's child to share already and stop stealing every toy he was headed for. and, apparently, her parents didn't feel it was their place either. he finally got his turn in the egg chair. and more turns after they hauled her out of there. 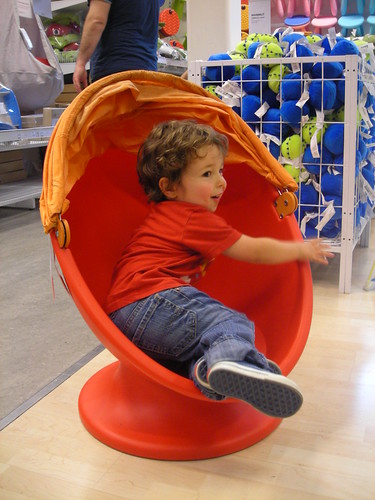 i was forced to purchase an obscenely large box of those oatmeal wafer cookies with chocolate in the middle because they no longer sell the smaller packages. considering they are all gone 36 hours later, i am pleased to report brian ate at least some of them.

after talking to an insane and rude old lady wearing an ikea shirt, i located the white stoneware utensil holders i was looking for. they will one day contain small plants and be hung on this white metal peg board i've had sitting on the floor in here for the last three years. i stole the idea from ikeahacker. it is my brilliant way of having plants in here which cannot be destroyed by small children or eaten by cats and thrown up all over the floor. now, i just have to get over my fear of hanging it up improperly and ripping holes in the wood paneling just before the shards of pottery and clumps of dirt are strewn all over the floor.

we got home in time for brian to go for a grody deep-tissue massage with an asian, who was self-named "rex", who got out some kind of utensil when he got to brian's feet instead of using his hands. i'm told this is out of the ordinary.

i know what you're thinking: should brian have really gone in for a massage with a case of suspected pink eye? i pointed this out and he referenced massage envy's cancellation policy whereby you have to pay if you cancel with less than 24 hours notice. i suggested giving them the option of returning his money or massaging conjunctivitis. but, brian really wanted that massage.

brian got us cosmic cafe for dinner. oliver was very into my cosmic stir, but had managed to start confusing cashews with tofu. he also spent the day calling the camel from his new vintage fisher price 3-D animal puzzles a zebra. he persisted even after i showed him animal photos on google. the elephant spent saturday night with oliver. while scanning the free movies on no-pay-per-view, i just happened to see gummo, which had been recently recommended. brian had seen it ages ago, but was game for seeing it again. i fell asleep after about 20 minutes. i just can't help it.

i was up early again on sunday. brian decided to call himself in absent again citing the bad back and illness. oliver and i packed ourselves into the car at 10:45 and headed for south arlington and gnismer farms. it was a beautiful day, if you could manage to ignore how fucking windy and chilly it had become. we pulled into the grass-covered parking lot 45 minutes later and i tried to wake oliver up. i asked him if he wanted to go pick strawberries and, even in his half-sleep, he knew to answer "yes."

i had icicles being driven into my ears out there and was wishing i had brought a hat to keep my hair from whipping into a frenzy. we spoke with a large man about the rules and he handed us a little cardboard box with a metal handle and i led oliver out to the black plastic-covered rows of delicate strawberry plants. i was pleased to see that even the quadrant nearest the entrance was not yet picked over. it takes a long time to walk any distance with a toddler and it seems even longer when you're starting to get earaches.

oliver was a total pro and picked up on the game in no time. he picked only the reddest of berries and not once did he try to eat one. the closest he came to ill behavior was giving a little jerk on the handle of the basket because he wanted to carry it all by himself. he probably would have stayed out there all day and all night picking berries, but we stopped after fifteen minutes or so. i grabbed two bunches of asparagus off the wagon, along with my very first and very tiny artichoke.

i am disappointed in myself for not properly switching the camera to the daylight setting, but i suppose the blue cast does serve to convey the temperatures. 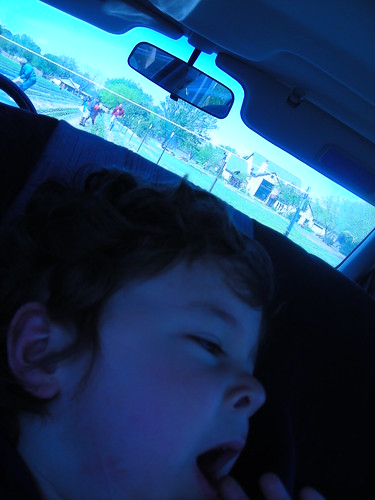 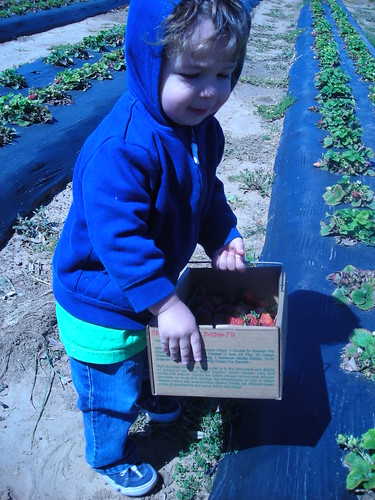 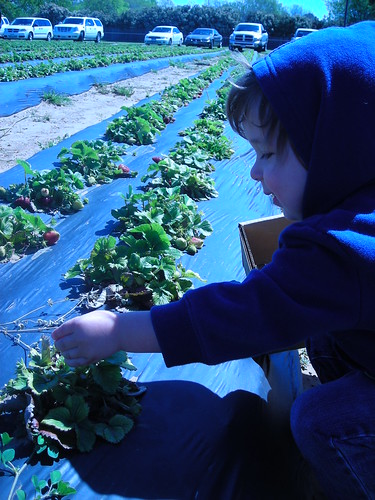 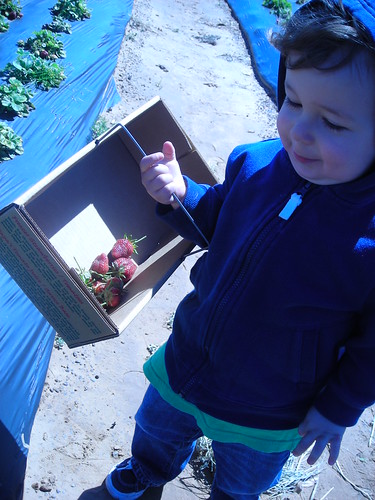 oliver was super-pleased to now be a strawberry picker. he ate many of them upon our return and did not mind that some of them were on the tart side.

after a couple of hours at home, oliver and i went to uncle darren's to have him tell us how much money the government is going to give back to us. $5511! that's how much! that more than covers our first semi-annual school payment due in july. and the rest should just about cover what we'll owe for his summer program. i love the healthy tax refund.

while we were over there, oliver had a regular hoot. over the last week, he's totally come out of his shell and moved into that stage where you have to start worrying he might leave with a stranger. he was all over paul and following him to and fro. at one point, i realized paul had gone outside and barely heard a rustling only to realize oliver was still inside. AND STANDING AT THE TOP OF A STEEP, WOODEN STAIRCASE GIGGLING. i nearly had a heart attack. he thought it was hilarious.

this older couple paul is friends with showed up and oliver let the lady pick him up immediately. like, he wanted her to pick him up. it was so weird to see.

he also dropped one hundred raisins on the rug. they blended in rather well.

it was super late when we got out of there, and that equals seven pm. i dropped oliver by the house and went for vegetable masala at the roti grill. i was too tired to think of getting something out of the freezer.

i totally screwed up by not getting a xmas stocking and an easter pail for violet at the same time i got them for oliver. i don't think i even considered it at the time. i mean, i don't guess we knew we would have another, but i'm pretty sure we kind of did. even if we didn't want to admit it yet. the pail is nothing special, so i'm surprised i haven't been able to find another yet. the stocking... god, i'm probably going to have to find someone to duplicate it and hope they don't give me some nappy-looking non-approximation of it back.
Collapse