finally, after much dragging of feet, oliver spent his first night in his big boy bed (also known as my old bed) in his room.

he had been a little off all evening and i had attributed it to possibly not having had a long enough nap. he totally had a big time flopping all over the bed while brian and i were getting it ready and the sheets changed. we moved the hello kitty jam box and the "noise maker" and bat and monkey and blanket in there. i went in with him to lay down and he had a 20-30 second burst of very pitiful tears and i felt panicked that he was super sad to be out of our room and then he wiggled under the covers and was asleep minutes later, bat in one hand and monkey in the other. i wanted to cry a little bit, but i didn't. 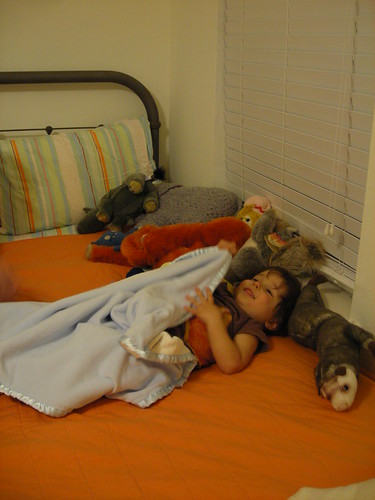 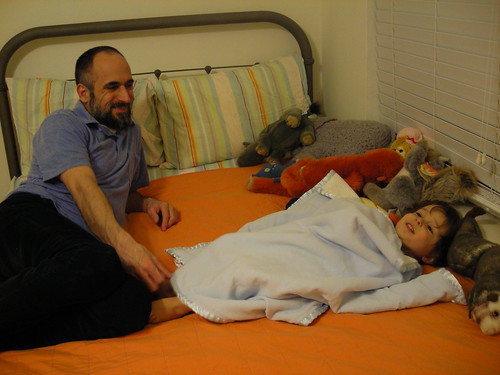 he had his usual tearful waking at 3am. he had managed to wiggle out from the covers, down to the middle of the bed, and had flipped around. i held him for a minute and then asked if he was ready to lay back down. i was trying to put the baby blanket on him and was surprised to see him trying to get back under the real covers.

i was very impressed with how smoothly he has accepted the transition so far. though, i am a little worried that after school, he climbed up on the bed and transferred monkey and bat back to the crib.

today, susana called to say he wasn't acting like himself, which we had noticed a little before school as well. he would get easily frustrated and sad and was saying "it hurts." of course, he wouldn't say what hurt. when she asked him to get his plate for snack time, he went to the corner to get it and then just started crying for a minute. i was worried his ear had become infected, but she never saw him pulling at it.

i called the ped to make sure the overnight strep test had come back negative and it had. 99% of the time, he gets sick on a friday and 43% of the weekends we go out of town, he gets sick. but, he seems to be okay now. i hope. we're leaving in the morning for tyler to celebrate my sister's FORTIETH birthday. shidang.
Collapse