a couple of days after recovering from the stomach virus last week, oliver got the runny nose. by friday, he had the coughing chest. somewhere in there came the mucous poo. i still don't quite understand how to differentiate between standard toddler smoosh poo and toddler diarrhea.

we'd been fortunate that he's been pooping before going to school. that all changed on monday. several weeks ago, brian won the battle to send him there in pockets instead of prefolds. he pooped his diaper and his diaper pooped his shorts and shirt. because the pockets are not fit to function as anything more than prefold covers.

tuesday, i showed up and the sub was there. she said she was about to change his diaper, but he was busy with an activity. i apparently did not understand the entire situation because he came over, i picked him up, i felt something wet on my arm through his shorts, and i put him back down. poop was squished out of the diaper, down his leg, over his sock, and on to his shoe. before it was all over (and i got to clean it all up), there was a pooprint on the floor and poo on the bottom of MY shoe.

yesterday, miss S was back. brian had forgotten to take another pair of emergency pants up there and i arrived to see oliver in his emergency tshirt, pocket diaper, and tennis shoes. it had been another mudslide. particularly because he had not pooped at all before school. and then he ate all of his rather large lunch. pushed it right out. miss S said he technically shouldn't have been at school, since he'd pooped two days in a row, but she hadn't known about the previous day.

around 5:41 this morning, he woke up coughing and pooped shortly after. who knows if it was diarrhea or not? i don't. so, he's just staying with me today. this before his four day weekend for fall break.

i'm trying to stave off television, but it won't last. so far, he's tried to pack himself in a suitcase and is now playing with old, fuzzy play dough.

ps: on the second day of school, oliver stole a pair of rather sparkly shoes. here he is casing the joint... 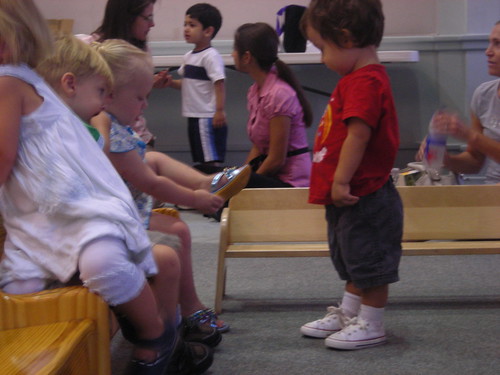 that's miss S, azmer, and miss J in the background.

to celebrate the recent decrease in temperatures, we ventured outdoors last saturday on our first trip to the dallas zoo. i had grand plans to take the dart rail down there, but naptime ran too late. as it was, we only had about two hours to explore.

as luck would have it, this was also the opening weekend of the state fair, so the grounds were gloriously empty. i got the feeling we spent more time looking for animals than seeing animals, but it was a nice visit nonetheless. brian took oliver to the stingray bay tank to pet the rays. this meant that brian pet the rays and oliver made all manner of mess with splashing. he was soggy for the rest of the visit.

oliver was wearing his giraffe shirt in the hopes we could get a photo of him with a giraffe. but we had difficulty finding the area containing the big dogs of zooland: giraffes, lions, elephants. we did find the rhinos. all the smaller, hidden animals are still lost on his two year old eyes. again i say, there's a reason most places don't charge for kids 2 and under.

we kept seeing the awesome monorail train and finally jumped on it. i can't imagine being on that thing in the full summer sun. 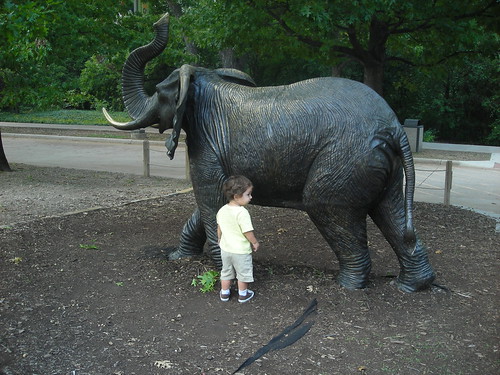 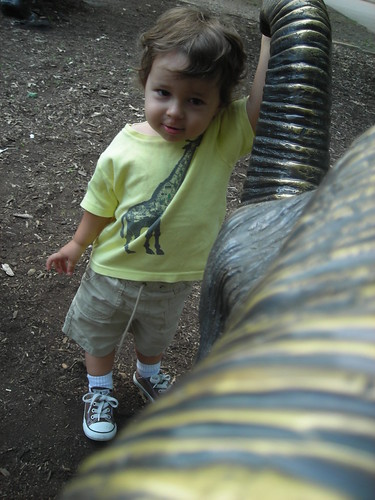 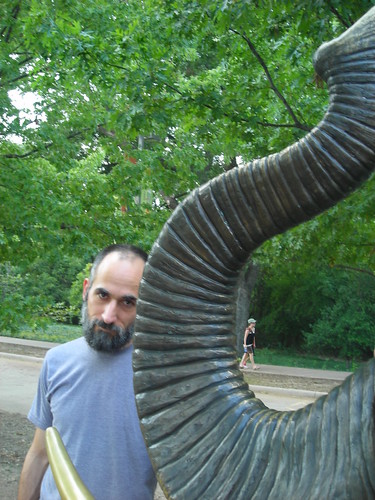 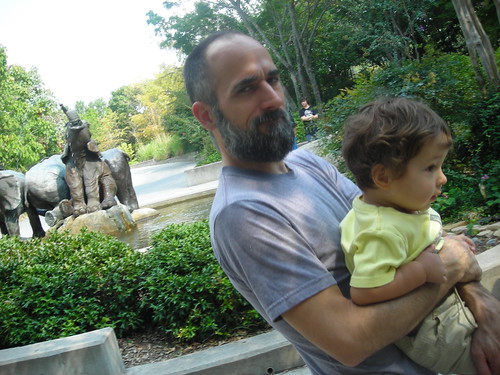 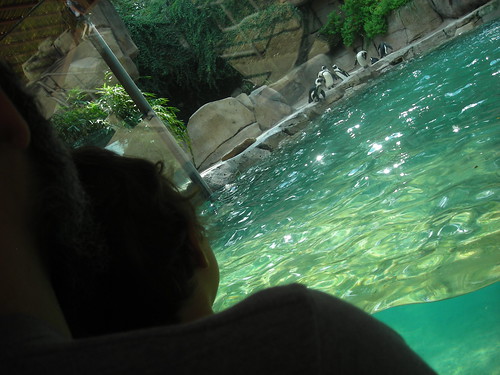