When I was young, it seemed that life was so wonderful,
a miracle, oh it was beautiful, magical.
And all the birds in the trees, well they’d be singing so happily,
oh joyfully, oh playfully watching me.
But then they sent me away to teach me how to be sensible,
logical, oh responsible, practical.
And they showed me a world where I could be so dependable,
oh clinical, oh intellectual, cynical.

There are times when all the world’s asleep,
the questions run too deep
for such a simple man.
Won’t you please, please tell me what we’ve learned
I know it sounds absurd,
please tell me who I am.

Watch what you say or they’ll be calling you a radical,
a liberal, oh fanatical, criminal.
Won’t you sign up your name, we’d like to feel you’re
acceptable, respectable, oh presentable, a vegetable!

There are nights when all the world’s asleep
the questions run so deep
for such a simple man.
Won’t you please, please tell me what we’ve learned
I know it sounds absurd
please tell me who I am.

you know, i was just going to post the lyrics, but that video is just too beautiful to ignore.

jesus on the keys.

okay. so i tried to complete post part II of florida over a month ago, but i really hate doing QA and some of the memory fields in my databases just weren’t jibing and it was throwing all the florida reports off and i just can’t send a client data that isn’t correct. the client would never know that tuesday’s hours were incorrectly showing up in wednesday’s column, but i would know.

in the spirit of no one else cares... 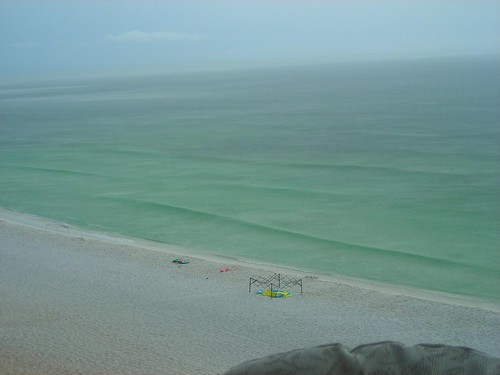 after missing an entire night of winks, i allowed myself to sleep in sunday morning, but only because i forgot to pull my swimsuit out from the bedroom (i was sleeping on the couch and brian and oliver were in the bedroom). we have a tradition in our family. when you are in florida, you rise at the crack of dawn, pull on your swimsuit, and bathe in a stream of sunscreen. then you walk down the beach on the eglin AFB side until you think you might collapse and be set on fire by the rising sun and then you turn around and realize you're nearly two miles away from the el matador (those are dad-estimated miles). it sits there looking tiny in the oceanspray haze and taunts you, refusing to get bigger at an acceptable pace. you swear you've learned your lesson. you do it again the next day. in previous non-child-rearing years, i have also engaged in a moderate afternoon walk. this does wonders for getting the dead skin off your feet. and it's not bad exercise either.

by the time i returned from the morning walk, brian and oliver were up. brian was non-functioning. the coffee he thought he had packed was sitting in our kitchen cabinet at home all pissed off that it had missed being vacation coffee. rather than send him off on his own to get lost in a beachside hamlet, i elected to drive him to the starbucks we had passed by the night before. it was quite the to-do to order a sack of coffee from the drive-thru window. i had no idea. i'm sure the people behind us cursed us for being schlubs.

that evening, we got fancy and ate in. i had made and frozen some seitan stew to bring with us, but it had suffered in the process. so, i subjected only myself to it. i reckon this was the night my parents were kind enough to watch oliver while brian and i took a short walk on the beach in the waning sunlight. we later tried meeting my parents at fort walton beach's iconic beach supply store, alvin's island. our arrival time coincided with oliver's cranky time and all hell broke loose quickly. he lasted long enough for us to get some tshirts and a ponies-in-the-surf beach towel for brian. then we fell asleep early like a bunch of 82 year olds.

monday morning, at the crack of dawn, i was up with the best of them. that would be dad. my suit was ready. my sunscreen was ready. my legs were ready. we didn't make it all the way to the space station because the breeze was dead and it had been killed by the steadily warming rays of the sun. we were whipped.

my dad told me about how he had assembled all this beach garbage washed up from the ocean into a little piece of street art. he made a car. it had four tires. maybe even a spare. it was a two-seater beach chair number with a stickshift. he wanted me to see it. i said that was okay, you go ahead, because he had also told me that someone had added to the affair by topping off the stickshift with the severed head of a sea bird. that's a little too fast for my tastes.

oliver displayed some OCD leanings that week by persistently arranging items on the coffee table in a row and adjusting each individually. he also enjoyed placing coasters and shells in a circle. 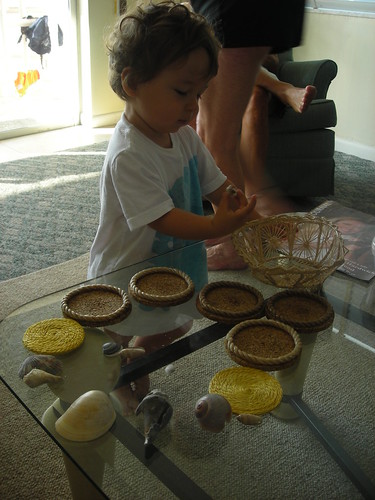 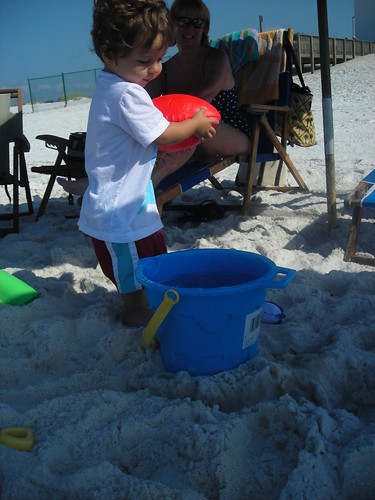 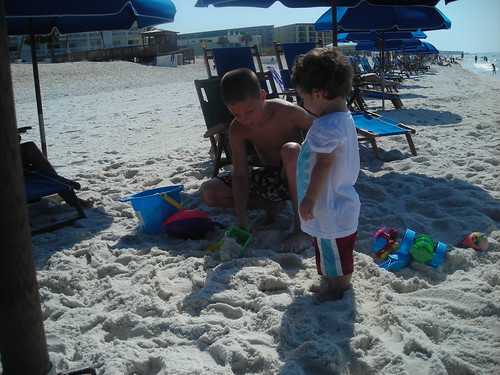