yesterday afternoon, oliver and i went to see dr hamner, an associate of his new ped. we were there because he had started getting a fever midday saturday and we'd been doping him with motrin. it was accompanied by drool, so we assumed there was some two year molar action going on in there. then sunday afternoon, he started acting like his front teeth hurt and he was continuing to have a nasty fever. let me tell you now, this all makes for some troubled sleep. hurrah.

we seem to have the worst luck getting into doctors in a timely manner. we were scheduled for 2:45 and were seen about 4:00. what makes it unbearable is you spend 20 minutes in the waiting room where the kids can have a good time playing with toys and then they stick you in an examination room for almost an hour where they can get nervous and worked up. he was more interested in putting paper towels and a tissue in the trashcan than reading the books. and playing with a trach can in a doctor's office is right where i want him to be.

oliver eventually gave up trying to entertain himself or escape and ended up sitting on my lap for some time and screaming no occasion in case someone might hear him and come rescue us. after reading a laminated medical booklet from the wall pocket showing us exploded diagrams of eyes and ears and kidneys and photos of rosacea and ringworm and fifths disease, i said "this sucks". oliver, speaking as best he could with his pain-peppered mouth responded several times with his head thrown back over my arm: "thith thuckth. thith thuckth. thith thuckth."

i told the doctor we no longer even try to take his temperature with a thermometer because no matter how many of them we buy and try, they each give a wide range of several different readings every time. instead, if he feels hot, we give him motrin. they took it for me and it was only 98.1.

i wasn't particularly successful at restraining both of his arms and his head, so she brought the nurse in for some muscle. it also afforded me a better position to see the canker sores on his tongue. i confirmed they were not passed on by one of my lovely cold sores (the latest of which began surfacing the day teacher landed on our doorstep). it's called herpangina. i guess oliver ate some poop of an infected child at the little gym a week ago. it looks like she also wrote down viral pharyngitis. i think. i'm not sure what that's about. she did say there was a big tooth back there, but i'm not sure if it was already through or what. i guess i must get flustered in the doctor's office because i always come out of there a little confused and wondering why i didn't ask five different follow up questions.

before going back to the waiting room, the doctor gave him a pedialyte popsicle and you would've thought he'd been handed the keys to the kingdom. or a light saber. it activated his talking feature and he started telling me this totally embellished story about how he told the doctor off back there in the examination room, forgetting i had been in there with him. he waved that popsicle around and laughed when i pretended to take a bite. it was his new favorite toy, but was going nowhere near his mouth. i didn't want to be rude and give it right back to be thrown away, but i also couldn't have a baby in a car with a melting popsicle. and i was ridiculously late getting back to work. he finally put it on his tongue twice and said nummy nummy before i wrenched it from his hand and put it in the trash. fortunately, no fireworks resulted.

i made this super fancy banana hemp ice cream for oliver when we got home, but it seems we shield our child from frozen foods and it was freaking him out a little. he practiced eating grapes with a fork instead.

i wonder how long it will be before i eat some poop or spit and get the herpangina.

i broke in the veganomicon the night of the olympic's opening ceremony.

chickpea cutlets. and herbed mashed potatoes with gravy and olives.

not bad. the texture was a little on the gummy side and i think i might try increasing the ratio of chickpeas next time. i think i'll also bake the next batch instead of pan frying. mom would lament the brown-heavy palette. 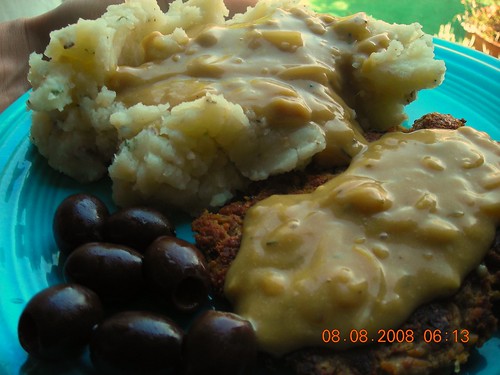 to round off the minor string of celebratory disasters that were my 36th birthday, we went to tyler the saturday after. of course, my mom was the only one there since the rest of my family had decided they would rather go back to florida.

that afternoon, we took oliver swimming and let him play with the fire hydrant sprinkler and he had a grand time. he must be half labrador. 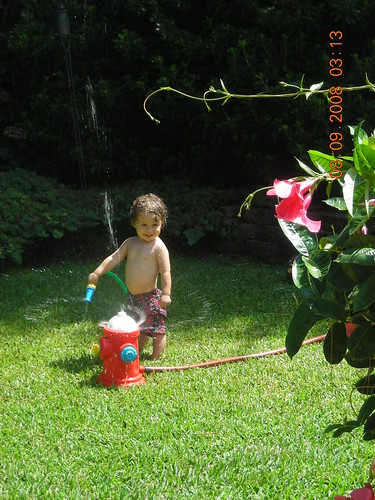 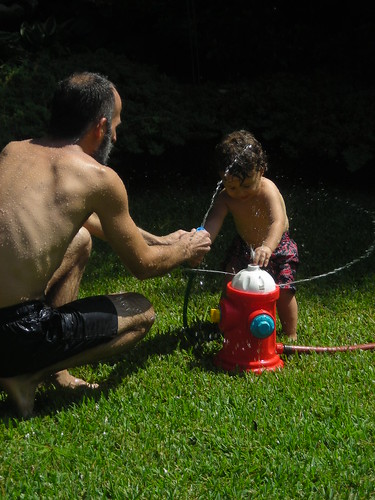 i opened presents and mom threw together the traditional eggplant-mushroom spaghetti dinner. i skipped on having an official birthday cake and pretended my second plate of spaghetti had candles on top. mmmmm spaghetti-cake. 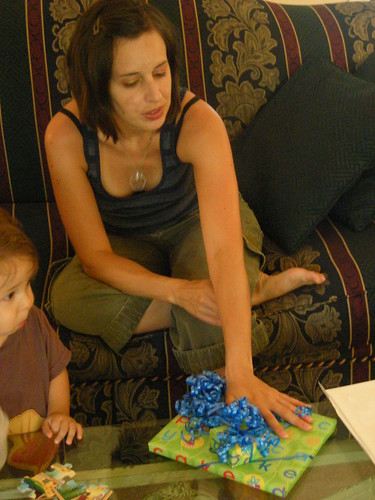 we were going to leave oliver with my mom post-bedtime and go hang at christie's for a couple of drinks, but we were running a little behind and the second i set oliver in the pack and play, he began some serious heartfelt sobbing and kept saying "noooo! noooo! noooo!" i think he's started developing abandonment issues just in the nick of time for school. needless to say, it broke my heart and brian decided to stay home with him. this turned out to be a good idea because i am certain that brian is much better friends with going to sleep than he is with listening to christie and i chatter like a couple of hens for three hours.

so i got to christie's a little before 9. her miniature people were fast asleep and her husband had just returned from a business trip. we retired to their upstairs guest room and got loopy and giggled and i rolled on the floor once or twice. i had a screwdriver for the first time probably since high school. uh... i mean, since i was 21. it was nice to have a little uninterrupted girl talk for once, no offense to darren.

sunday, i had intended on having a play date over at christie's or possibly a swim date at mom's, but that fell by the wayside. brian and i became too lazy to be in the pool (this might sound a little backward, but having a toddler in the pool with you is far from relaxing). oliver was dying to go in the backyard, which meant he was also dying to go in the pool. 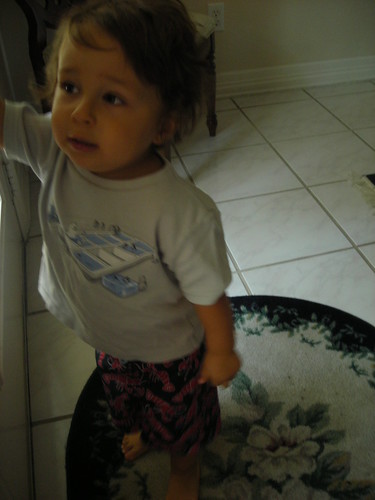