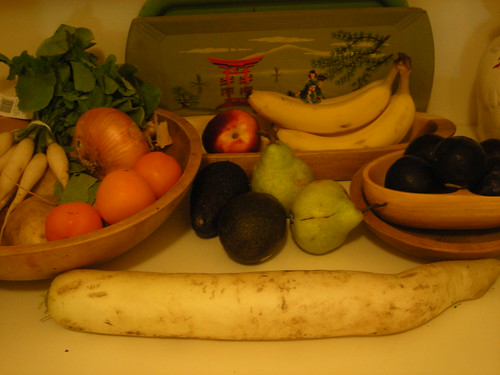 we went to central market sunday and i went nuts in the produce department. in addition to what's pictured above, there's also an eggplant, mushrooms, carrots and who knows what all else.

i've been afraid of, yet intrigued by, the daikon for about a month or two now. i finally took the plunge. that's the cudgel-shaped business at the front. i tell you what... that's a lot of a log of unfamiliar produce to have to sink or swim with.

last night, i finally dug in my heels and shredded maybe a third of that thing with nothing but my bare hands and a knife. it was too water-logged to go through my new grater. i threw it into some oil with onion, carrot, garlic, salt, pepper, dill, rosemary, turmeric, thyme, and coriander to make a hashbrown. it didn't make a pancake, so i suppose maybe home potatoes would be a more appropriate description. aside from a little scorching, it didn't taste half bad. paired it up with ranchero beans and wild rice pilaf.

but then, there was still 12 pounds of daikon staring up at me from the bottom shelf of the refrigerator.

tonight: a revised colcannon recipe. because i saw it on the internet several weeks ago and brian made the mistake of selecting a head of cabbage when prodded to select produce for dinner. three potatoes, one yellow onion, the rest of the daikon, carrots, the same spices as above, and a head of cabbage. wish me luck.

in the middle of cooking all that, oliver started screaming. i hadn't heard a thud and he was sitting near where the powerstrip is under the couch, so i thought he'd gotten a shock. i picked him up and blood started pouring out of his mouth and down his shirt and diaper. i got some toilet paper on to him and it stopped about 30 seconds later, along with his crying. then, he looked down at the big spots on his shirt and said "ohwhoa red!"
Collapse