i rented jonestown: the life and death of the people's temple sunday afternoon and fell asleep less than halfway into it. we picked up where we left off last night and i learned just how much i didn't know about jonestown. i guess all i knew was a group of crazies went into the jungle and willingly drank punch or were tricked into drinking punch and they were obviously crazies.

i didn't even realize it was a religion-religion. and that they were huge and influential and had multiple locations and were integrated and were led by a psychotic man who could be identified easily in the crowd because he wore psychotic-man shades at all times. like he was blind or something, but could see his way by the light of god. and i spun with illogical dizziness trying to figure out how these people got roped in and wouldn't leave even after he told them there was no god and no heaven and he was their god and "i know it's one of your first visits here, but if you would like me to do you in the ass, it's not a problem." i mean, come on, you weren't even remotely brain-washed yet, mister. hit the pavement before things get any uglier.

and then, the night before, many were showing signs of wanting to get out and they were begging anonymously for help and they were obviously coming to their senses, so why drink the kill-aid? why? spill it in the dirt and pretend. don't let your eight relatives drink it and plunge you into despair. slap their hands. tip the tub over.

and that whole thing with the congressman and the airplane? what? no one told me. i was only five, but there have been 30 years where someone could have told me since.

and we tried to watch the special features, but i had to yell at brian to turn it off immediately because i couldn't hear the story again about the man turning to see his wife holding their infant son while poison was injected into his mouth to the background of a recording of babies and children screaming while they died from being poisoned. how is it that there's a recording of that?

their little faces pressed down into the dirt. their little shoes not moving. your baby is being killed and you still can't snap out of it? what is wrong with you people?

909 dead. countless children included. it was absolutely sickening and not the twisted crazies fun i had envisioned. i almost wish i hadn't rented it. but, i suppose it's better to know. the anonymous letter writer wanted us to know.

we ran late getting out of here on friday, july fourth. of course. i had to drive to three starbucks to find one open so that i could purchase emergency coffee and sugar. once on central expwy, i marked the Official Departure Time at 9:45pm. two minutes later, we were stuck in traffic for 20 minutes because our impeccable timing had placed us in the middle of everyone leaving the fair park fireworks show. i saw exactly one firework which i believe to have originated there. i was astounded to see how many people were exhibiting their lack of concern for their personal safety as they stood on top of cars parked on the shoulder of an elevated highway exchange. one woman was on her cell and not even looking at the cars ooching by as she stepped partly into the lane in order to open her SUV's door. where were the cops? arrest them!

i was sad to have missed an official show, but was pleased that until at least midnight, i was greeted with spontaneous roadside explosions as i made my way to shreveport. it was pitch black out there. i've learned just how difficult it can be to drive at night. i had downloaded zillions of podcasts to keep me focused, but the retarded radio transmitter thing we had to use for my mp3 player in brian's car totally sucked. so i tried to stay alive by the light of 80s music i hadn't heard in ages.

by some miracle, i lasted behind the wheel until 3:15am. five and a half hours. i tried to pull over earlier, but we were dropping down through louisiana on 49 and i kept thinking there wouldn't really be a gas station at that exit because it's totally dark and then, there it would go. i was pleased to find such vast stretches of blightless highway still exist and a little frightened to think of driving in the dark without our modern, sprawling, gas station/fast food safety net (not that i would need fast food, but they usually have phones and bathrooms).

we stopped at a mega station with an arcade and hats and tools and a diner and god knows what else and oliver woke up. we walked him around a bit and i gave him a sesame stick as i was loading him back into his car seat. for the first time, he really started choking. i looked in his mouth and could see the stick stuck halfway down his throat. it was terrifying. i managed to fish it out despite having his sharp, little puppy dog teeth clamp down on my fingers. it scared the hell out of me and i thanked god he hadn't held off on eating it only to have that happen after we were driving. i thought he was old enough to eat without choking to death, but apparently i was wrong. he will never eat in the car again until he is out from under my roof.

brian took over driving and i remained awake because my trust in the driving of others steadily diminishes as i age and brian is not as defensive a driver as i would like him to be. we picked up I10 and then the I12 bypass in baton rouge so that we wouldn't accidentally stumble south into new orleans. i finally began nodding off for what felt like 45 second intervals and then jerking back awake in a panic thinking we were about to crash. we crossed the black mississippi somewhere in there and saw the buildings on the riverfront lit up like an LED christmas. oliver miraculously slept through our second stop for gas. we silently cheered.

by the time we reached mobile, brian had had it. it was daylight and the baby woke up again, but i kept promising him we were almost there. we weren't really, so it turned out. i drove us past the USS Alabama and over bridges looking out to the gulf and down through the underwater tunnel, which i'm starting to think isn't really underwater and someday, i'm going to look that up. we passed into florida. after hooking a right on to I110 in pensacola, we called 911 to report what looked like a dingo coming off meth walking doggedly, if you will, down the stripe separating two lanes in a work zone. poor dog. we were spit out on to gregory street for a reported 174 feet. i was not expecting that. then, just as suddenly, we were on the pensacola bay bridge for what seemed like an engineering feat of eternity.

we crawled through stoplights and reduced speed limit zones down santa rosa island on bloody 98 and finally found another starbucks to see us through the final 25 miles. we pulled up to the el matador at 9:45am and were greeted by my parents.

we were staying in unit 469, which is obviously the one with the best view... upper corner closest to eglin AFB's deserted beach. an oasis dressed in wicker and mirrors. looking out the window felt like you were out to sea on a really tall boat. you could look out at the water and scrub a pot in the kitchen sink. you could spy on people walking the beach with dad's binoculars. i'm pretty sure i stayed in that room at least once... the time i rode over with my grandparents in their buick when i was 12 along with my sister and two cousins. i'm pretty sure the tuckers used to stay there, too. those rooms. they all start to run together.

rather than go to sleep like normal people (hey, we had a freshly awakened toddler on our hands), we put on suits and hit the beach. the water was a pleasant dill pickle green from the seamoss. oliver was delighted beyond repair to be back at the ocean and, much to my relief, there was not one case of him running directly into the water without supervision. it helped that the beach had a two foot cliff most of the week. he adored jumping the waves and then sticking his legs straight out with toes pointed up while you held him just off the ground and prayed for mercy. brian ended up purchasing prescription back meds.

we learned to hold him a little higher after the first day when i pulled his swimsuit down to discover two fistfulls of sand and seaweed.

brian napped with oliver that afternoon. i started to nap on the beach, but my father handed me a beer and i spent my time drinking that instead. brian asked, since i was still not sleeping, if i was just going to go insane instead.

we did the traditional dining on godfather's pizza that evening with my sister's family and then we skipped the traditional winn dixie shopping spree and replaced it with the publix shopping spree. they had promised an endless array of amy's frozen products. they did not mention they would charge the highest prices found in the 48 contiguous united states.

needless to say, i crashed early. 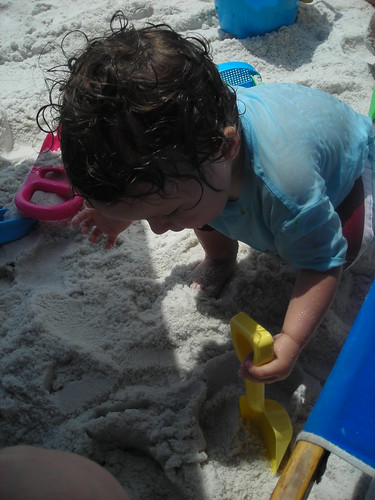 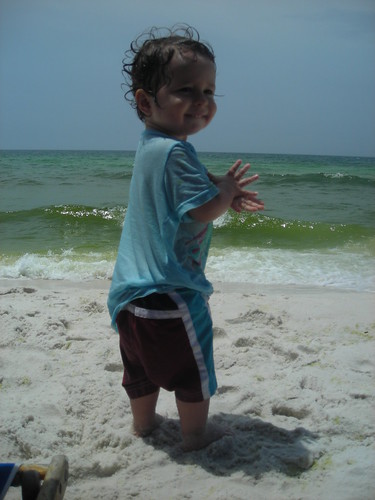 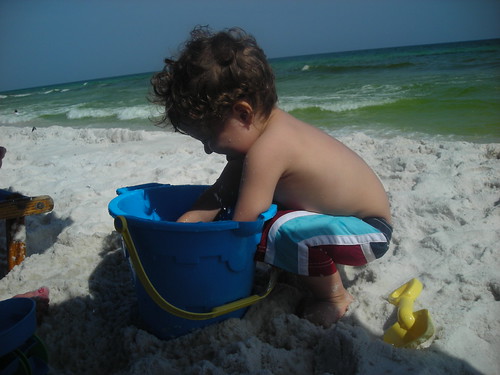 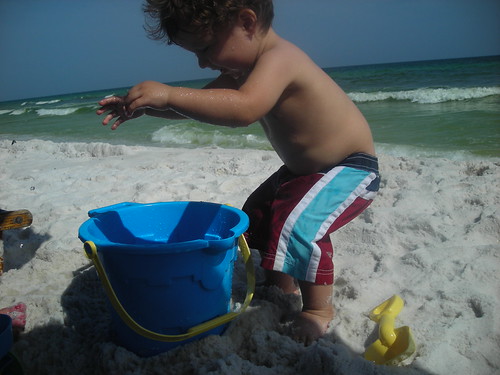 leon? it's interesting how the presence of micronized ocean waters would occasionally cause my digital camera to think it was lomo or from the 70s. or both. 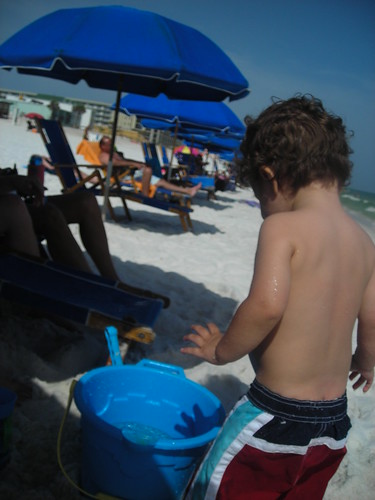 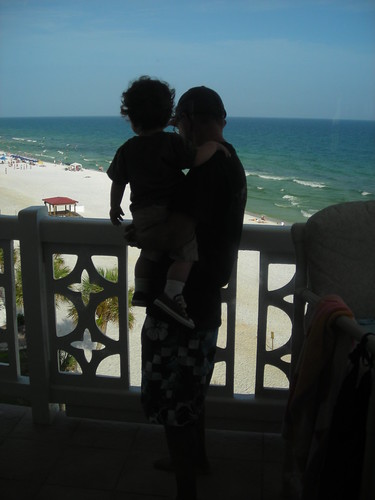 look... madonna, heather, julia, and i all enjoy glancing up on the diagonal. we're sisters!