no one told me memorial day weekend was coming earlier than the last weekend of may. i found out the thursday evening before.

that saturday was a hell day of driving all up and down dallas. after the little gym, we drove to the galleria and then realized oliver was asleep. we turned around and drove back a bit to the Y so we could finally get gym memberships.

brian remembered EQ3 had opened in dallas near the galleria, so we took turns running in to make sure they didn't have any couches we preferred to the gigantic ikea couch. then oliver woke up and all three of us went in so he could play with fake lemons and one of the salesgirls.

then back to the galleria for two pairs of baby converse, among other things. brian is in the habit of leaving the house without eating and then bellyaching about starving. we stopped for lunch at the corner bakery and got a little table overlooking the ice rink.

after that, we had to drive a bit to get to nicole's so we could borrow her jeep to take another drive to ikea where we thought we were going to pick up a sofa, only to realize we are an unrealistic people who assumed they would stock a heap of couches in a heap of fabric choices.

then it was a drive from ikea back to nicole's and from nicole's to mai's to pick up dinner and finally home. we were gone from 9am-7pm. i haven't done that in a long time. we were exhausted.

sunday, we stayed close to home, with the exception of running to central market and whole foods, and i made some more party food test batches of hummus and cookies and black bean dip as well as some non-party seitan. darren showed up and was subjected to taste testing before we left to see priceless at the angelika and drinks at lee harvey's. i went totally nuts and had three beers. i don't think that's happened since my birthday last august.

on memorial day proper, we were feeling fancy and decided to take oliver to the grapevine bar over by where brian used to live. you might know it as the predominantly gay bar that was featured during the reveal portion of an episode of cheaters and the location of the recent chelsea handler booksigning.

i glanced around for signs saying no one under 21 would be admitted as i queued up at the bar to order and as brian dashed through the tiny bar with oliver to the back patio where we had the entire area to ourselves. i trotted happily after them, a beer in one hand and a kamikaze on the rocks in the other. it was a little warm, but there were shade trees and a little breeze and it was a beautiful day. oliver explored the basketball court and picnic tables and played with a little ball we had brought. he had just settled in with his cup and his crayons when the bartender came out back to place ashtrays on the tables and told us there was a fickle gay inside who's a regular customer and who had commented that a baby had been brought in the bar. the fickle gay is a friend of the owner's and the bartender claimed that though he didn't care, he was concerned the fickle gay would tattle.

we got the picture. we weren't entirely welcome. go ahead and finish your drinks, but silently understand that it will be time to leave after that. don't dilly dally.

brian was incensed. he was steaming. though i found it a little irritating, especially since we weren't told upfront and had even been given our drinks and then made to feel awkward, i let it roll off my back so we could enjoy what time we did spend there. i felt a little bad for the bartender because he seemed to have unwittingly squeezed himself between a rock and a hard place and i'm still not convinced he didn't give us a break on our drink prices. it's a shame because oliver seemed to like it there.

besides, i told brian, we can just finish up here and then go to the ginger man where we know they like having babies in the bar. so we did. and oliver colored some more and ran in circles around a tree and looked at the extensive rock collection and sat down on the ground in front of the waitress who had sat down on the stairs to talk to him. and she wasn't telling him to leave after he finished his drink, either.

we went home after our second leisurely drink and i made spaghetti with seitan for dinner. again.

at the grapevine. you can tell he's trying not to cry after being kicked to the curb. it's fitting that there's an EXIT sign in the background. 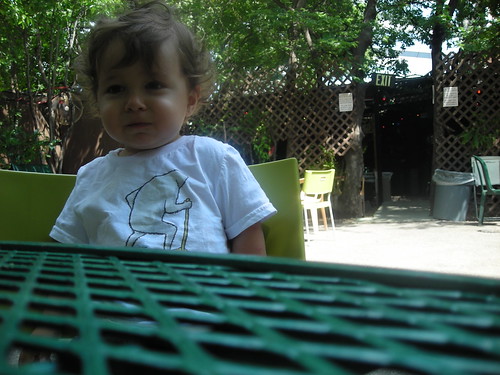 you can tell he's trying not to cry after being kicked to the curb. 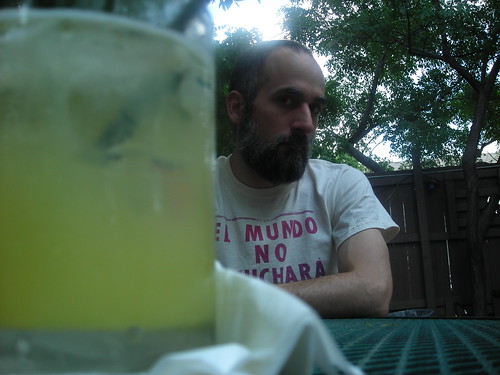 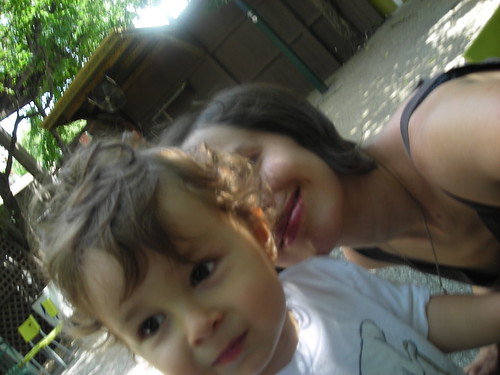