i'm relieved that our month of casually worrying over the state of our corner of the University Place Nation is over. for now. i'm still trying to learn that just because you clean up, doesn't mean it will stay that way forever. in our case, it lasts from one to two days. which is what makes me not like cleaning. i prefer a longer term investment.

i felt sad over and over that i was busy cleaning or baking instead of playing with oliver on friday and saturday. what a shitty way to spend your birthday. and then, i couldn't concentrate on him because i was busy with a house full of guests.

but that aside, he had a good birthday.

brian took off friday to clean. i tried to talk him into a beer lunch at the ginger man, but i was quickly shot down. i made a blender's worth of hummus, baked a three layer vegan chocolate cake, baked a nasty applesauce cake (which shall be going in the trash shortly), made 4 dozen almost-vegan peanut butter chocolate chip cookies, cut out "HAPPY BIRTHDAY OLIVER!!!" by hand, arranged family-made artwork in a gigantic frame, and assembled a rocking horse. i will admit to doing the old shove-it-in-a-corner-or-closet method of cleaning once time began seriously running out.

the big day got off to a shaky start with oliver's first tantrum followed by olilver's first accident before we'd even managed to leave the bedroom. he became angered with me for some unknown toddler reason and tried to grab my legs as i walked away. instead, he fell forward and caught his forehead on the inside corner of the footboard. took some talent. it wasn't until i'd left brian at home to clean and taken oliver to his little gym class that i noticed the fall had left a second eyebrow over his right eye. it was in nice shades of pink and blue. at the little gym is where accident number two happened. we've been trying to help him gain confidence with stairs and he was on the second step of some foam stairs when he changed his mind halfway through and started to bend at the waist to crawl down baby style. this made him into a human ball. he started unfolding when he realized he was pitching forward and landed nose first on the thin carpet. left a little pink trail down his nose and, somehow, on that little bit between nose and mouth.

i was so busy vexxing over (can i do that? vex over something? or does it have to vex me? whatever.) making non-vegan chocolate buttercream frosting and getting the cake decorated and about one hundred other tiny things that i forgot to put oliver down for a nap on time. he went down after noon and slept like a rock.

i was so freaked out from being a person lacking the genes to be a hostess that i kept forgetting we were missing oliver. and then he finally woke up.

brian and i finally decided to take him to his room to play and he started loosening up. my niece and nephew filtered in to color with him. he enjoyed this, though he periodically grunted at dylan. i do not know why. after crouching with him for untold minutes, i stood up to get the blood flowing again and came to the conclusion i was going to pass out. i leaned back against the dresser as much as i could and accepted what was coming to me. my brother-in-law asked if we were still going to florida and i marveled at how i was barely able to process language any more. i finally was able to muster a response that was something like "huh...uh.. yeah." and finally, my senses came back around without that embarrassing plunge to the floor.

my gin and grapefruit izze had nothing to do with it. i have poor circulation. so stop judging. darren had one, too. judge him instead.

after enough guests had been mixed slowly into oliver's water to bring him up to lukewarm, we moved him to the living room, which was serving as party central. we started opening the gifts we had gotten for him, which i had barely remembered to stuff into the reusable cloth bags. he still hadn't (and hasn't) warmed up to the rocking horse. he also got more colors (washable) and a coloring book, changeable charlie, roy toys lincoln logs, and haba wooden fruits and vegetables (to add to his collection).

emily_swank will be mightily pleased to know that the angus trilogy arrived via our postman right smack dab in the middle of the gift opening. that is some impeccable timing. too bad

emily_swank herself wasn't folded up in that box. now, that would've been a surprise. but we like the books, too.

my sister was unendingly amused by the factoid that we had taught oliver how to blow out candles. i do not know why this was so unbelievable. he folded under the pressure and was a little irritated by everyone singing happy birthday (he hates it when we sing to his shows). we ended up blowing out the candles for him. i heard my sister mention wasted time. he did get a second chance later, when there were just doting grandparents involved. cut to video below.

eventually, everyone vamoosed and the grandparents, brian, and i took oliver to dream cafe for his french fry birthday dinner and for accident number three where he made me nervous trying to scramble up on to one of those plastic outdoor chairs that they use for dining so that he could color next to grandpa and, just when i thought he was safe, his hands slipped from the edge of the table and his bottom lip cushioned the blow to his teeth. there was some blood. and crying. and then he was back to running us ragged in the heat and playing with a little girl named emma whose father was drinking special grape juice. we were there for thousands of years because they didn't put our order in the right spot and it was sucked down a blackhole.

oh, and then we started to walk off after dinner without oliver and looked like the most ridiculous parents ever. that is how frazzled i was.

sunday was spent being incredibly tired. we went to american apparel so brian could complete his collection of tshirts in every color of the rainbow. and then to home depot to buy more victims for our annual summer killing spree. my father made the mistake of bringing us a fresh, young moonvine. it's doing well at the moment, but it hasn't been a week yet. 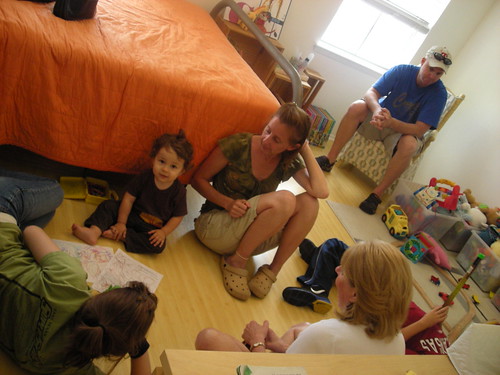 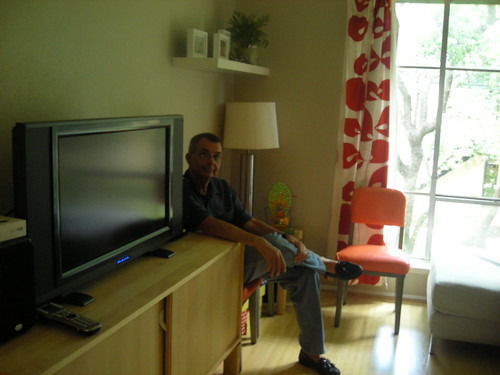 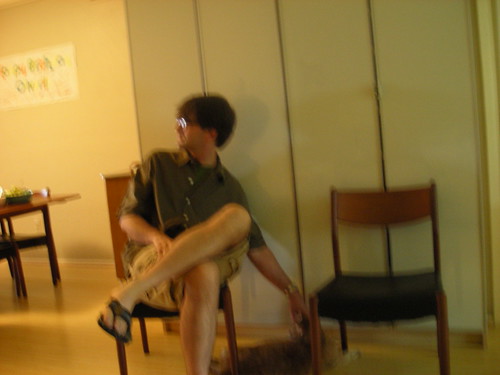 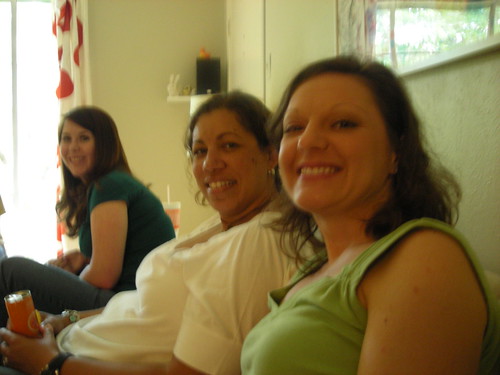 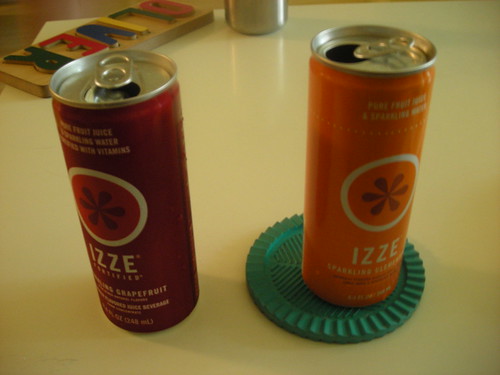 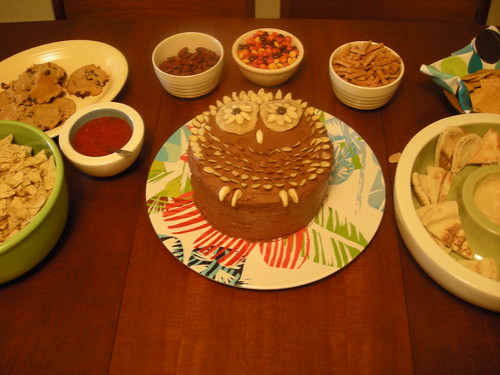